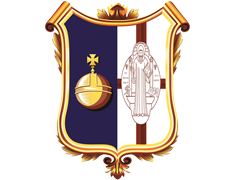 Our first week back after the half-term break was crowned with the beautiful feast of Corpus Christi. The St Benedict Academy choir was again privileged to sing at the Mass in the shrine of St Walburge. They sang Giueseppe Baini’s Panis Angelicus for three voices.

Each day, before lessons start, one of the Canons or Abbé lead pupils and staff in prayer and give some inspiring words for the day. Usually these are based around the season or the feast of the day. Today, Abbé spoke about St Angela Merici…

When St. Angela Merici founded the Company of St. Ursula, the initial idea was that these women would live a consecrated life, but without a distinctive habit and serving in the world, much like St. Angela herself lived as a Third Order Franciscan. They would go out to the poor and needy, and dedicate themselves to the work of education. St. Francis of Sales had very much the same initial concept for the sisters of the Visitation. Nevertheless, in both cases, the Church, in her prudence and wisdom, saw fit to nourish these apostolates with a cloistered life of prayer. Thus, both the Ursulines, after the death of St. Angela, and the Visitation Sisters became religious orders wearing habits, following the rule of St. Augustine and dedicated to all sorts of apostolic work, but with a strong focus on contemplative prayer. Our own Sister Adorers draw extensively from the vision of St. Francis of Sales and St. Jane of Chantal for the Visitation.

The Ursuline sisters are particularly devoted to the work of education. They formed dozens of generations of Catholics all over the world, providing them with not just a religious formation, but a comprehensive education. In our days, in which the need for Catholic education is most pressing, this same apostolic spirit of St. Angela and the Ursulines animates initiatives such as The St. Benedict Academy. Providing a solid and Catholic education, forming young men and women for all states of life and, particularly, instructing them in the Catholic faith and its defense against all sorts of error, is a crucial building block for the restoration of Christian culture.

May St. Angela Merici bless our endeavours with her intercession!

If you haven’t had chance to subscribe to our YouTube channel, please do. Our latest recording is of Giuseppe Baini’s Panis Angelicus for three voices.