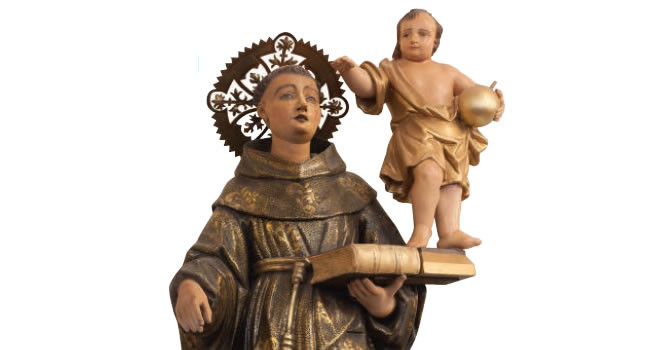 The statue of carved and painted wood, dates from the 18th century and was transferred from the original parish church in Hope Street. The statue is among the treasures brought from Portugal by Fr. Mullins who became parish priest in 1909 after teaching in the seminary in Lisbon.

The First Portuguese Republic lasted for sixteen years between 1910 and 1926 and it would have been during this period that many of the works of art in the Shrine were acquired by Fr. Mullins. The Republic brought the monarchy in Portugal to an end and enacted a series of anti-Catholic laws which provoked persecution and the destruction of churches and religious art.

St. Anthony is universally recognised as the ‘Patron Saint of lost things’, and he is one of the few saints depicted in art with the Infant Jesus. He was born in Lisbon in 1195 and he became a Franciscan friar, dying in Padua in 1231.