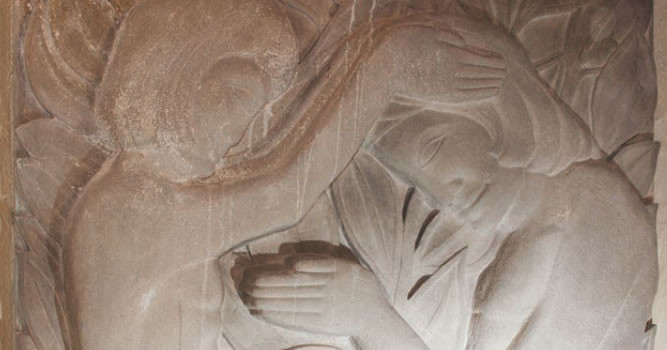 At the north end of the narthex is a small baptistery chapel. Liturgically this is one of the most important places in a church, where the first sacrament of Christian initiation is administered. The art deco reredos shows the baptism of Christ. The massive marble font – still in regular use – is octagonal in shape, in keeping with ancient Christian baptismal iconography. The number 8 is mystically associated with the sacrament of baptism in Scripture: ‘in the days of Noah, during the building of the ark, in which a few, that is, eight persons, were saved through water. Baptism, which corresponds to this, now saves you.’ (I Pet 3:20-21).

The two small stained-glass windows show three interlocking fish: three in honour of the Trinity. Since ancient times the fish has been a symbol of Christ as the Greek word for fish – ichthus – is an acronym spelling out the first letters of the expression, also in Greek: Jesus Christ, Son of God, Saviour. Speaking of baptism, the early Christian writer Tertullian (died c. AD 160) wrote: ‘we, little fishes, after the example of our ichthus Jesus Christ, are born in water.’ Saint John Chyrsostom (died AD 407), commenting on the Christ’s commission to the Apostles: ‘I will make you to be fishers of men’ (Matt 4:18), added: ‘This is indeed a new manner of fishing; since those who go fishing bring fish out of the water and cause death to their catch. We, however, throw human beings into the waters [i.e., of baptism] and when they are brought out they are vivified’.