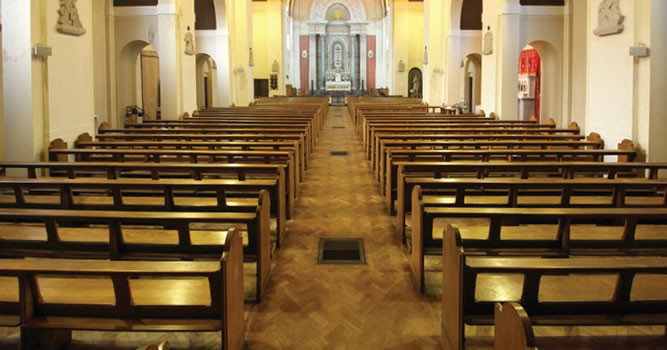 The nave, generally the largest part of the church, is reserved for the faithful, who assemble there when they participate in sacred ceremonies or come as individuals seeking a place for personal prayer. Symbolically, the nave – located between the narthex (the fallen world) and the sanctuary (heaven) – represents the Church on earth, the state of redeemed humanity. The word ‘nave’ comes from the Latin navis, meaning ‘ship’. One reason for this is visual: the nave ceiling – whether a barrel vault as here, or a Gothic ribbed vault, or a trussed pitch – often resembles the inside of the hull of an overturned ship. Symbolically, however, there is another reason: a ship represents the Church, which travels through the floodwaters of this life to the safe haven of heaven. The ancient Fathers of the Church often interpreted Noah’s Ark as a prefiguration of the Church. Moreover, Catholics see the Church as the ‘barque of Peter’. Just as two thousand years ago Jesus Christ preached to the crowds sitting in St. Peter’s fishing boat, today he continues to speak to us in the Church, the ‘ship’ of which the Pope, successor of St. Peter, is the helmsman. Taking our place in the nave of the Church should remind us of our place in the universal communion to which we belong. In the rite for the ordination of a priest, the bishop addresses these words to the assembled people: ‘The captain of a ship as well as the passengers are in the same condition as to safety or danger. Their cause is common, therefore they ought to be of the same mind’.

The nave is three bays in length, each with an arch leading to the narrow processional aisles. The span is 40 feet. It is said that Fr. Mullins wanted five arches, thus making the nave a good deal longer. Viewed from the outside, this might have improved the overall composition of the church, but the space within would have been even more cavernous. The bays are separated by simple engaged pilasters without elaborate classical capitals – in keeping with the art deco aesthetics of the era in which the otherwise classical church was constructed. The entablature is simply an unadorned string course which protrudes slightly over each of the pilasters, although the original plans for the church called for a fully moulded cornice and entablature of French stucco. A rounded lancet window is pierced into the vault in each bay. The central bay on each side contains a stained-glass window of the church’s patrons Peter (south side) and Paul (north side), which came from another local church. The nave has an impressive barrel vault, as yet unpainted. The benches were introduced in the 1960s.